skip to main | skip to sidebar

Here is my list of favorite basic painting supplies, suitable for painting from life.

Posted by Thomas J. Shelford at 13:34 No comments:

Optical Versus Intellectual Modes of Painting

In the course of studying with artists at the New York Academy of Art and Grand Central Atelier over the years I have come across several very different modes of observation when painting from life.  At the highest level of generalization these modes of visual thinking fall into two approaches:
The Optical Mode

The first style of visual thinking, the optical mode, tends to generate paintings that are highly chromatic with a stimulating range of hues.  Form is created primarily through temperature changes (contrasting warms and cools).  The virtues of this style are graphic impact, energy, movement and emotional effect.  The vices of this approach are a patchy, crude or "posterized" look. In my opinion, this approach is exemplified by artists like Ben Fenske.

The second style of visual thinking, the intellectual mode, tends to generate paintings that are tonal, with a subtle variations in values and a limited palette of hues and subdued chroma.  The virtues of this style are a subtle, poetic, and intellectually sophisticated look. The vices of this approach are a stylized mannequin-like polished feeling and a static lack of energy.  In my opinion, this approach is exemplified by artists like Scott Waddell.

Of course, in practice great painters combine both approaches fluidly, alternating between the two modes at different stages of the painting.  This level improvisation requires a a high degree of skill, experience and confidence which few of us can readily achieve. Fortunately in painting,  “The Process is the Product” and those of is who are mere mortals can bake the benefits of both approaches into our process.

The Process is the Product 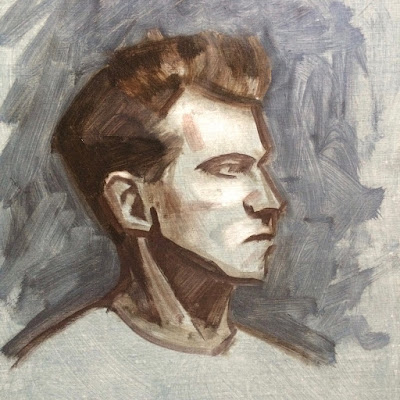 This stage is focused on reacting visually to color and identifying regions of color that can be grouped together.  This stage involves keeping each region of color generally flat and relying on brush application and edges for the transitions rather than “modeling” transitions with blended gradations of value.  Form is turned towards or away from the light with relative temperature changes (warmer or cooler). The values are intentionally compressed into the middle ranges. 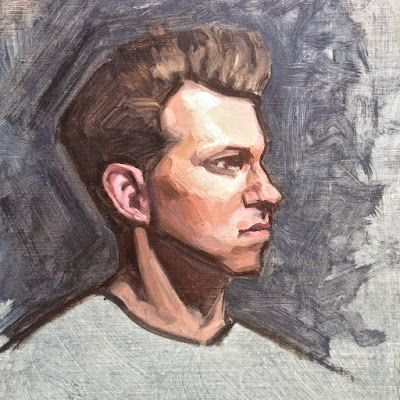 This stage is focused on “modeling form” by conceptually understanding of the surface planes as they turn towards or away from the light sources.  Starting in the shadows, gradations of value are applied that gradually working out from the shadows and into the lights.  The value range of the painting is expanded by working from the darkest darks to the highlights. 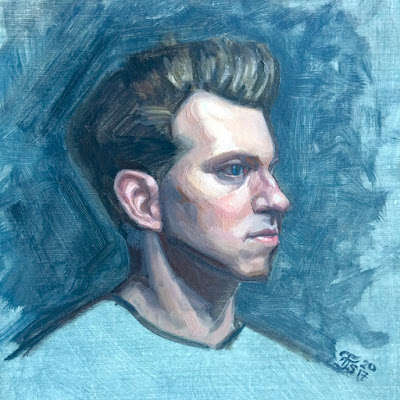 The combination of these two modes of visual thinking, each at a separate stage of the process, seems to yield a more nuanced and balanced result than favoring one approach at the exclusion of the other.

Posted by Thomas J. Shelford at 12:15 No comments:

In this post I'd like to walk through an alla prima portrait sketch approach.  Here is the final result: 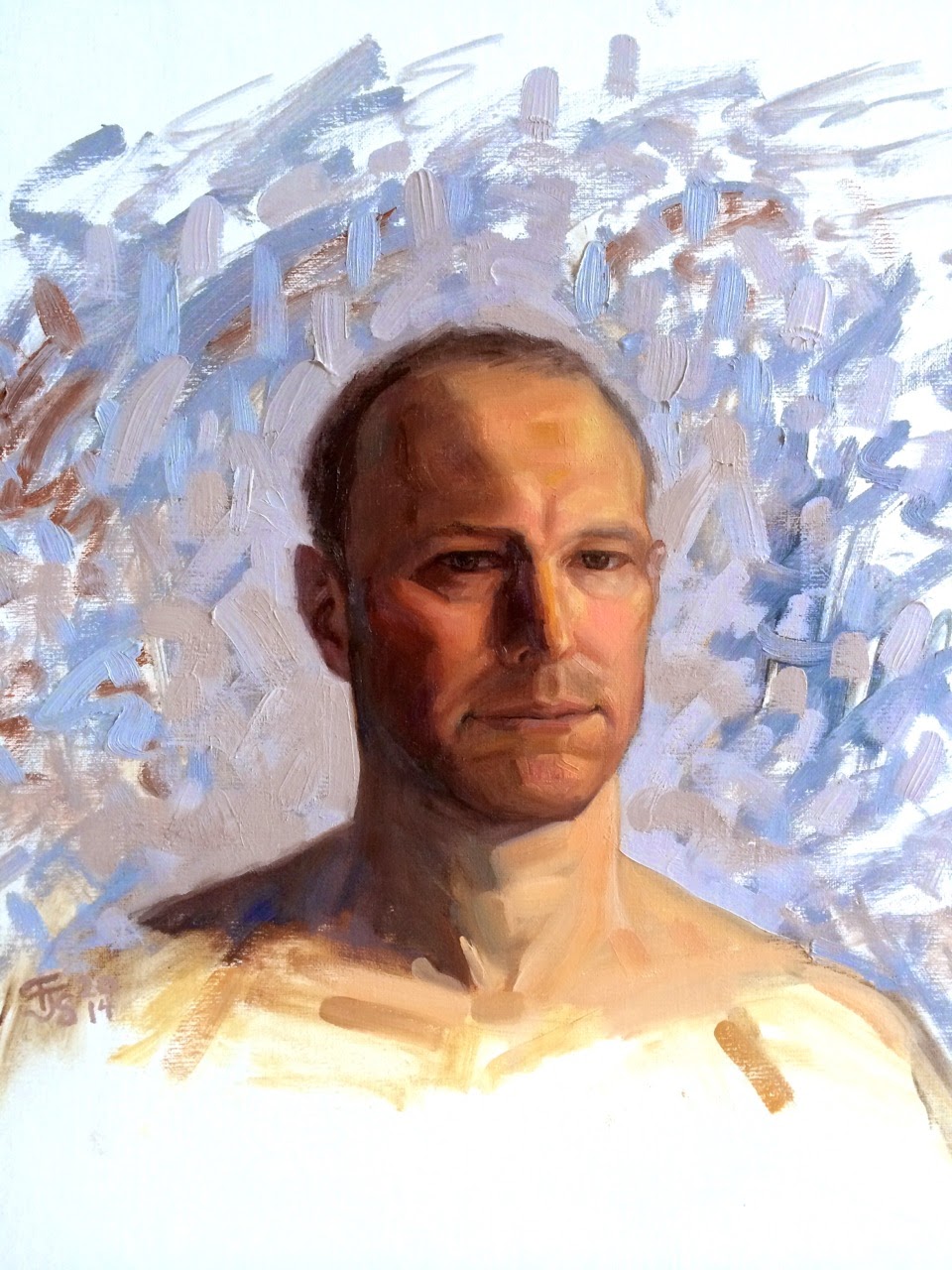 The canvas is prepared with an oil-based ground of Gamblin Oil Painting Ground thinned to the consistency of milk.  This "sizes" (water seals) the canvas and makes the surface less absorbent so that the paint will flow and the strokes will hold up their shape without sinking into the canvas weave.  A warm semi-transparent tone is then applied to the canvas  using a mix of raw umber (50%), yellow ochre (30%),  ultramarine blue (10%) and alizarin crimson (10%), thinned with mineral spirits.

For a convenient self-portrait the canvas can be placed directly on a long mirror so that you have the option of painting in "sight-size" where the reflected image in the mirror is exactly equal in height and width to the drawing. 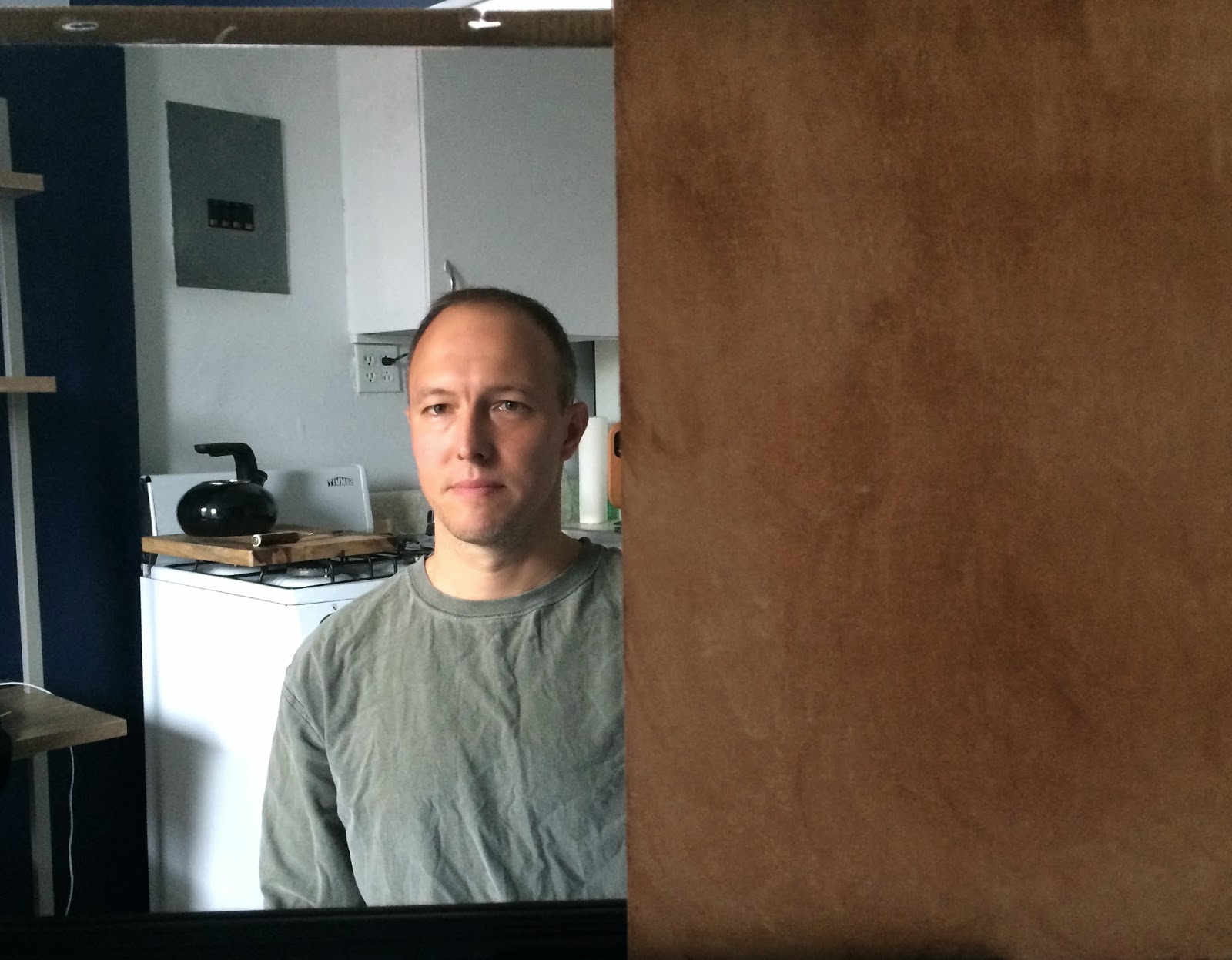 The purpose of this stage is to lay in a rough drawing, capturing the major simplified shapes and their relative proportions using a warm, dark transparent wash that approximates the main shadow color.  It's best to use large bristle brushes and create the initial drawing using straight lines and simplified shapes which will make it easier to evaluate the relative proportions. 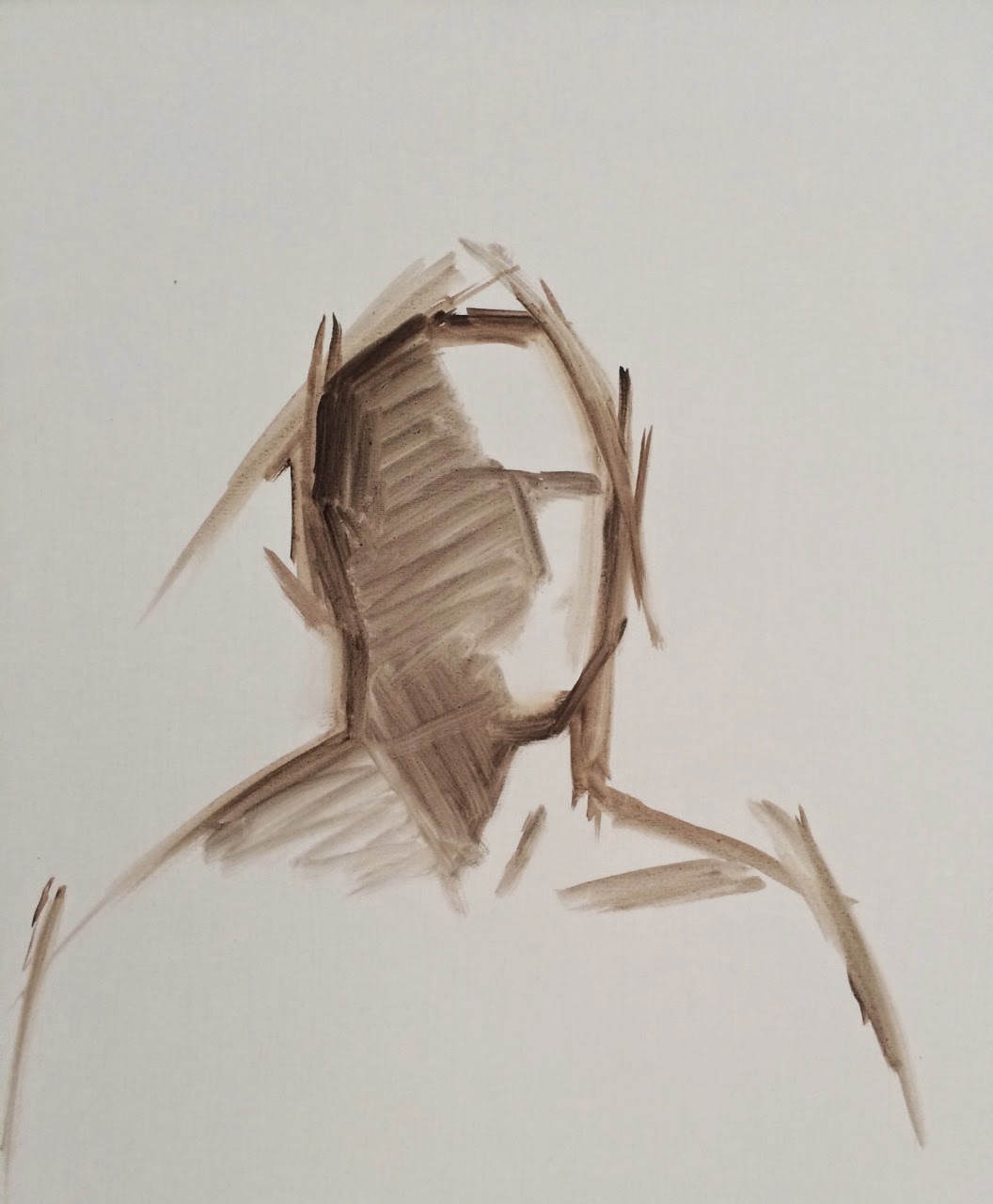 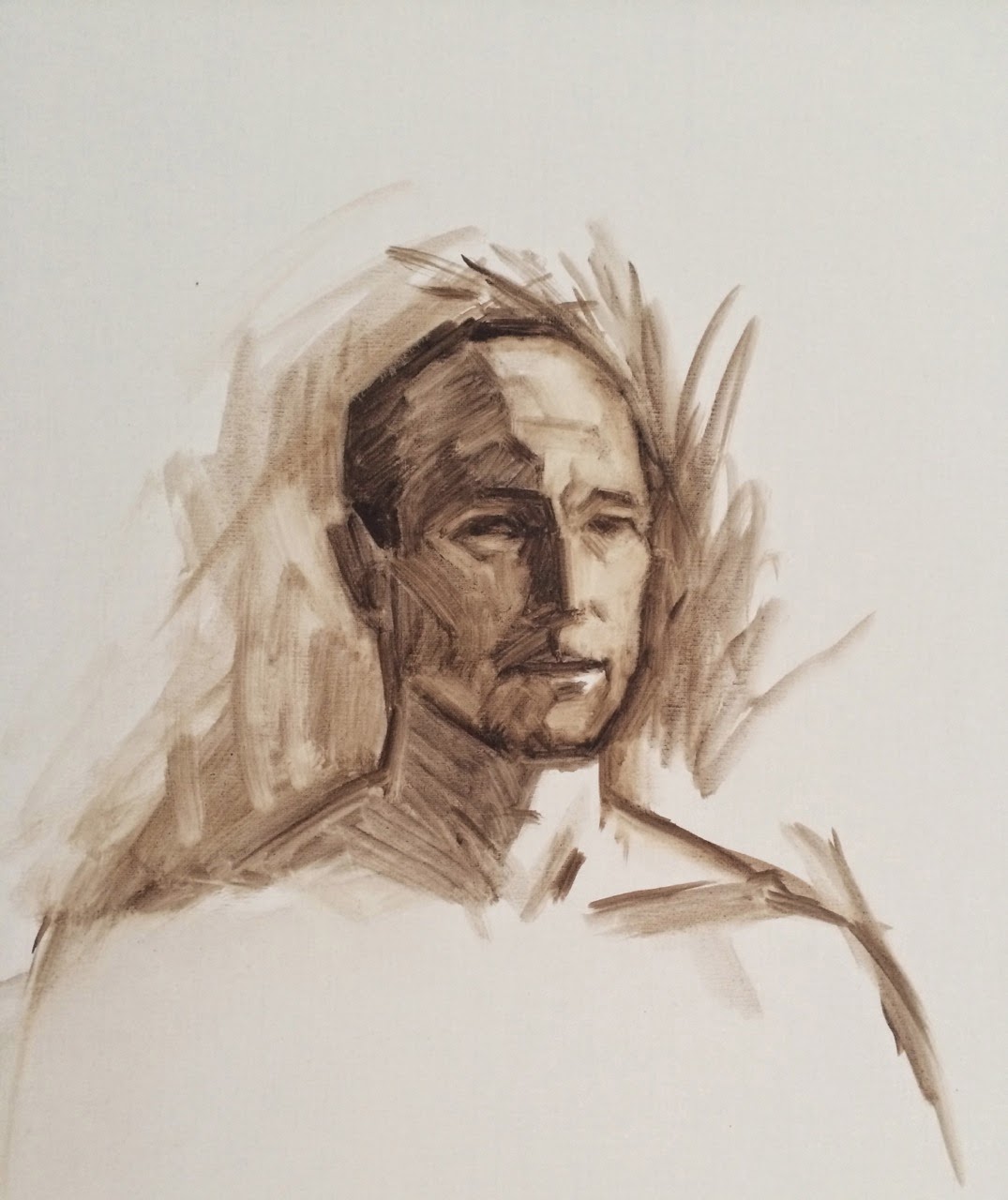 Once the major proportions of the shadow shapes have been defined, bristle brushes are used with plenty of thinner to scrape away the under-tone and indicate the light areas by allowing the white of the ground to show through.  This is called an "open" grisaille because white paint is not used. 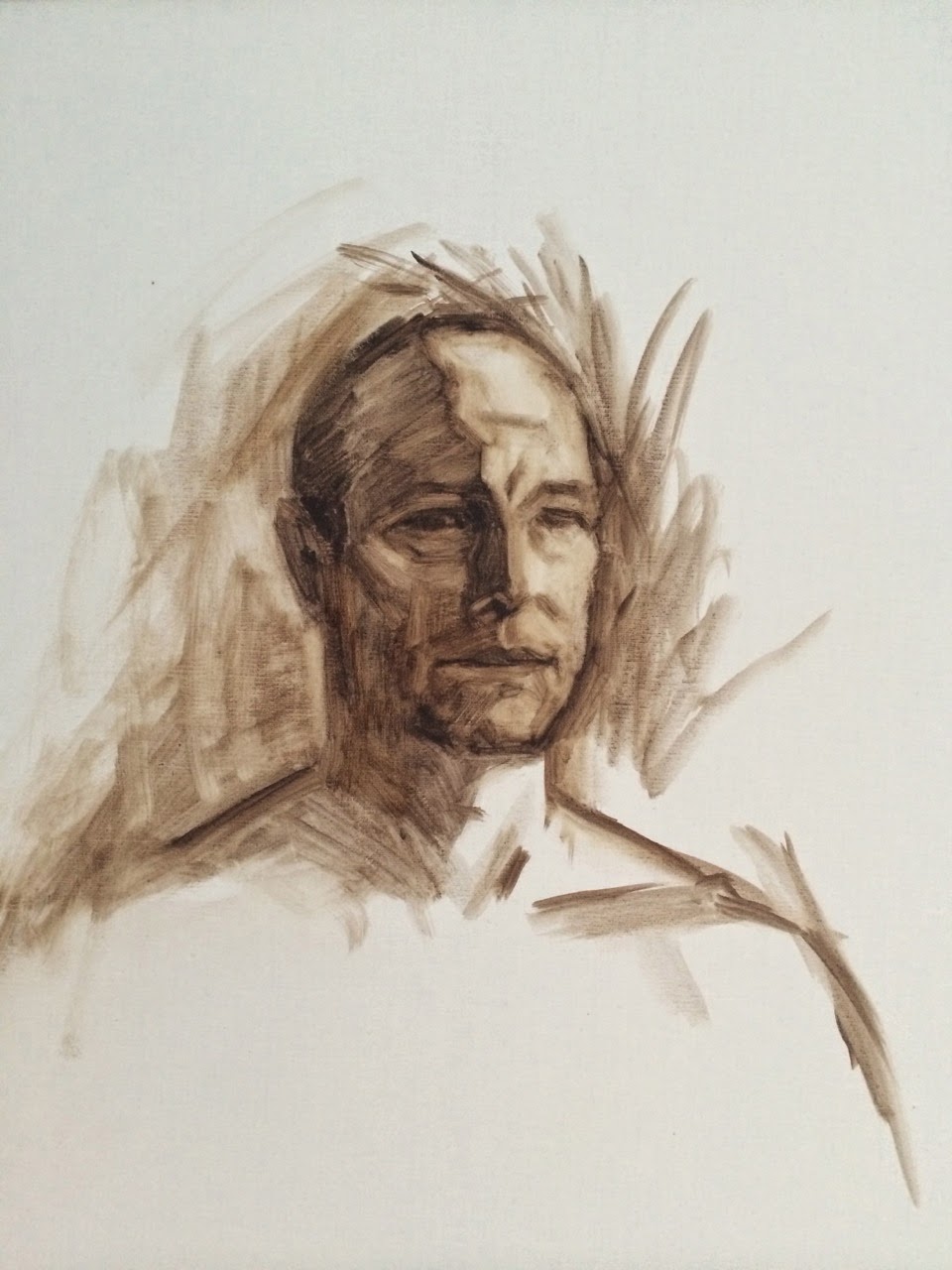 The "average mid-tone" colors for the 3 or 4 largest shapes are mixed and laid in side by side so that their relationship can be compared on the basis of temperature (warmer / cooler) and value (darker / lighter).  Typically this is the background, shadow shape, light fleshtone and clothing. These colors are laid in as flat "poster" shapes for easy comparison.  Once they are all adjusted to work harmoniously they form the basis of the value structure of the painting.   In mixing the "average" it is best to err on the side of darker middle values and low saturation.  It's also important to keep a bit of clean thinner in the brush so that this layer will dry quickly.  Pay attention to edges and "service the big shapes" by resisting the temptation to paint in smaller details.  Maintain the simplest, biggest shapes possible. 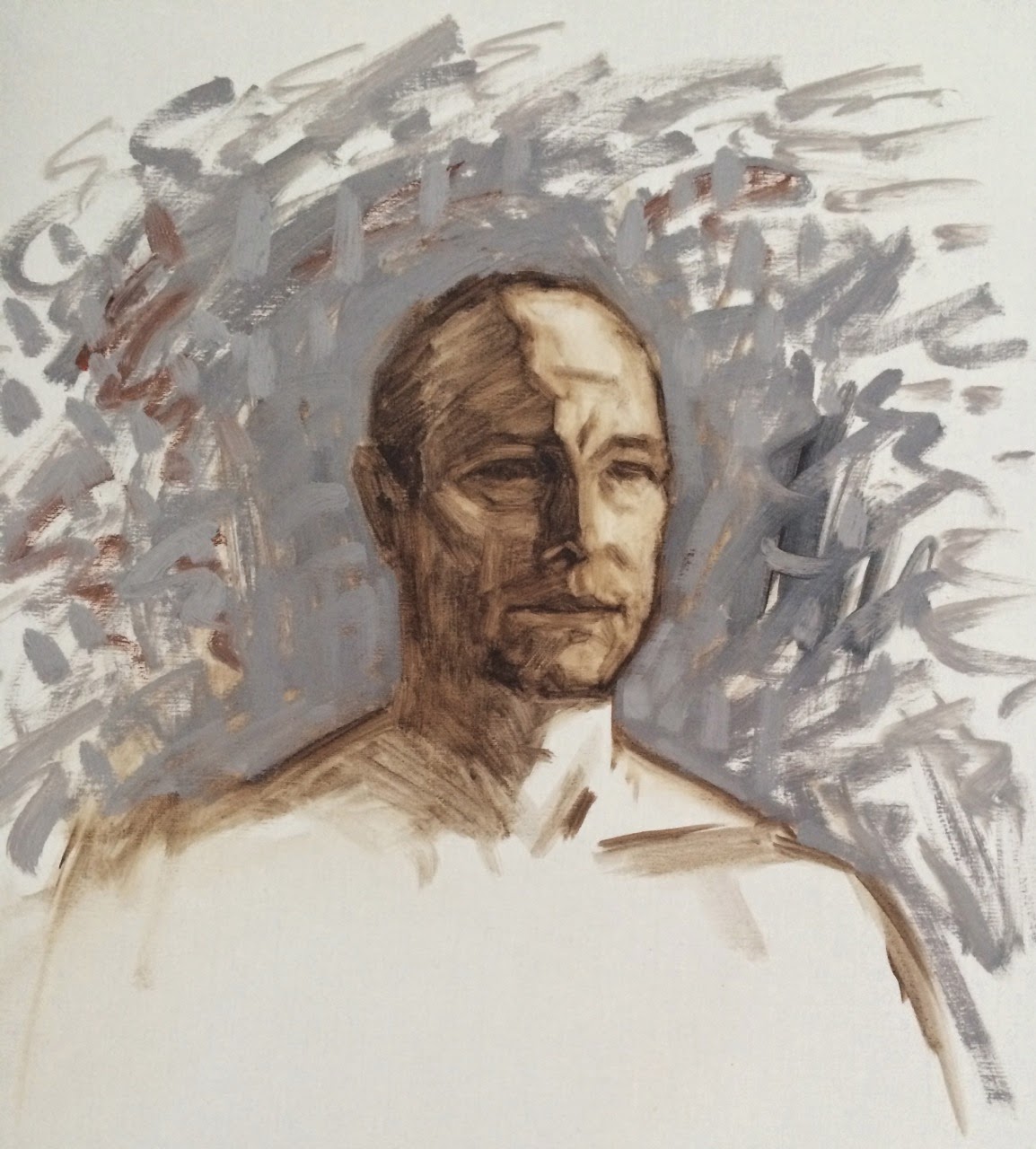 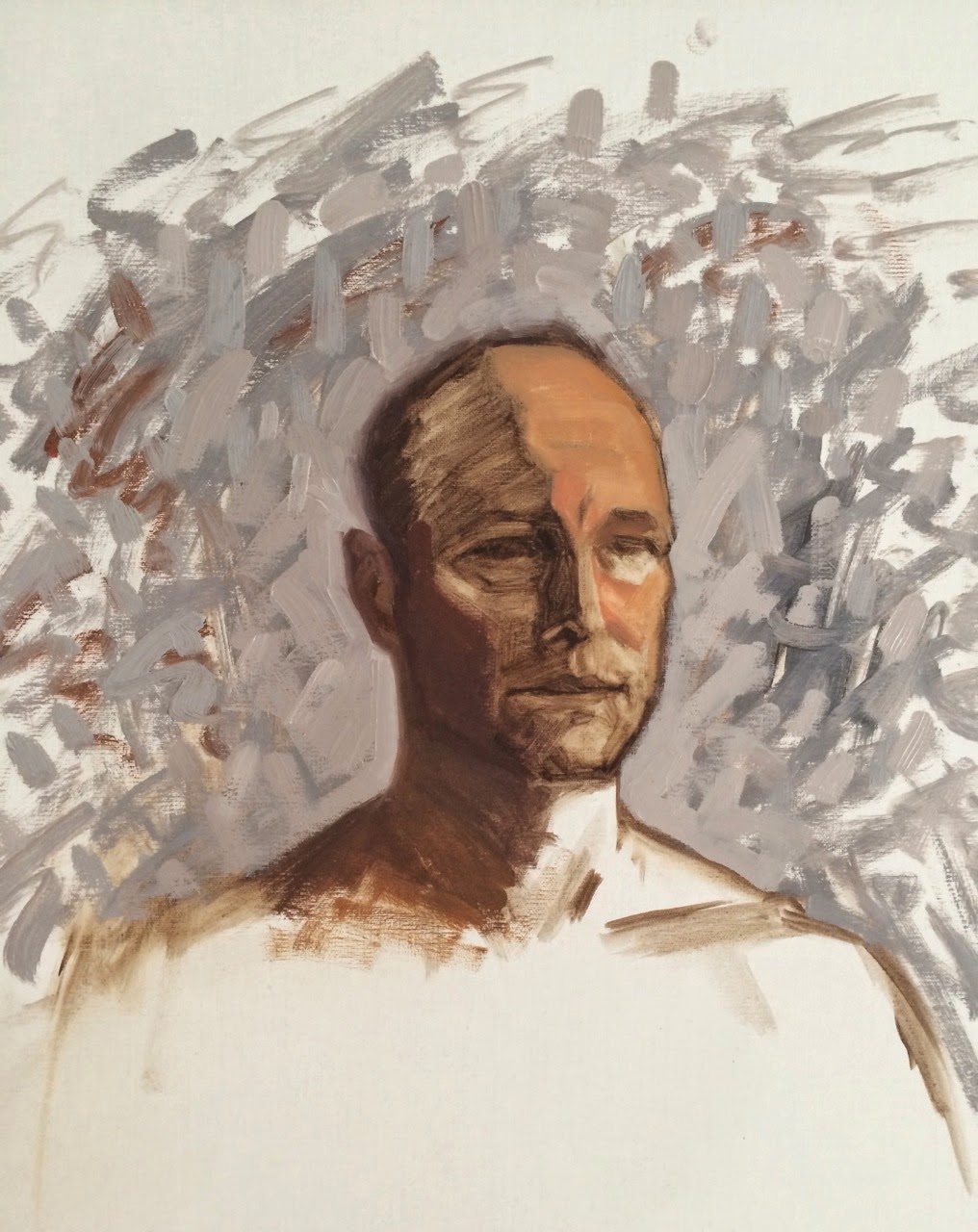 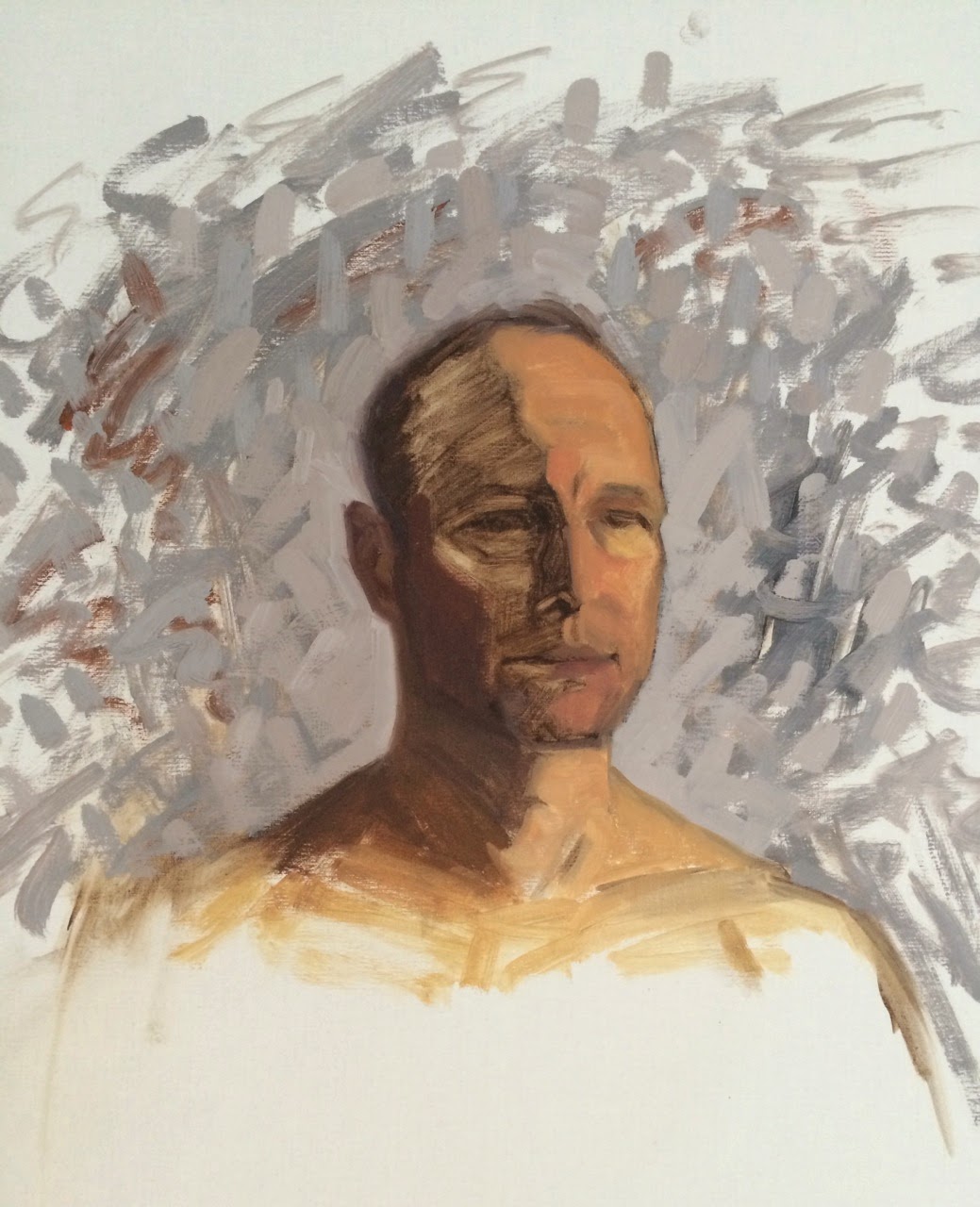 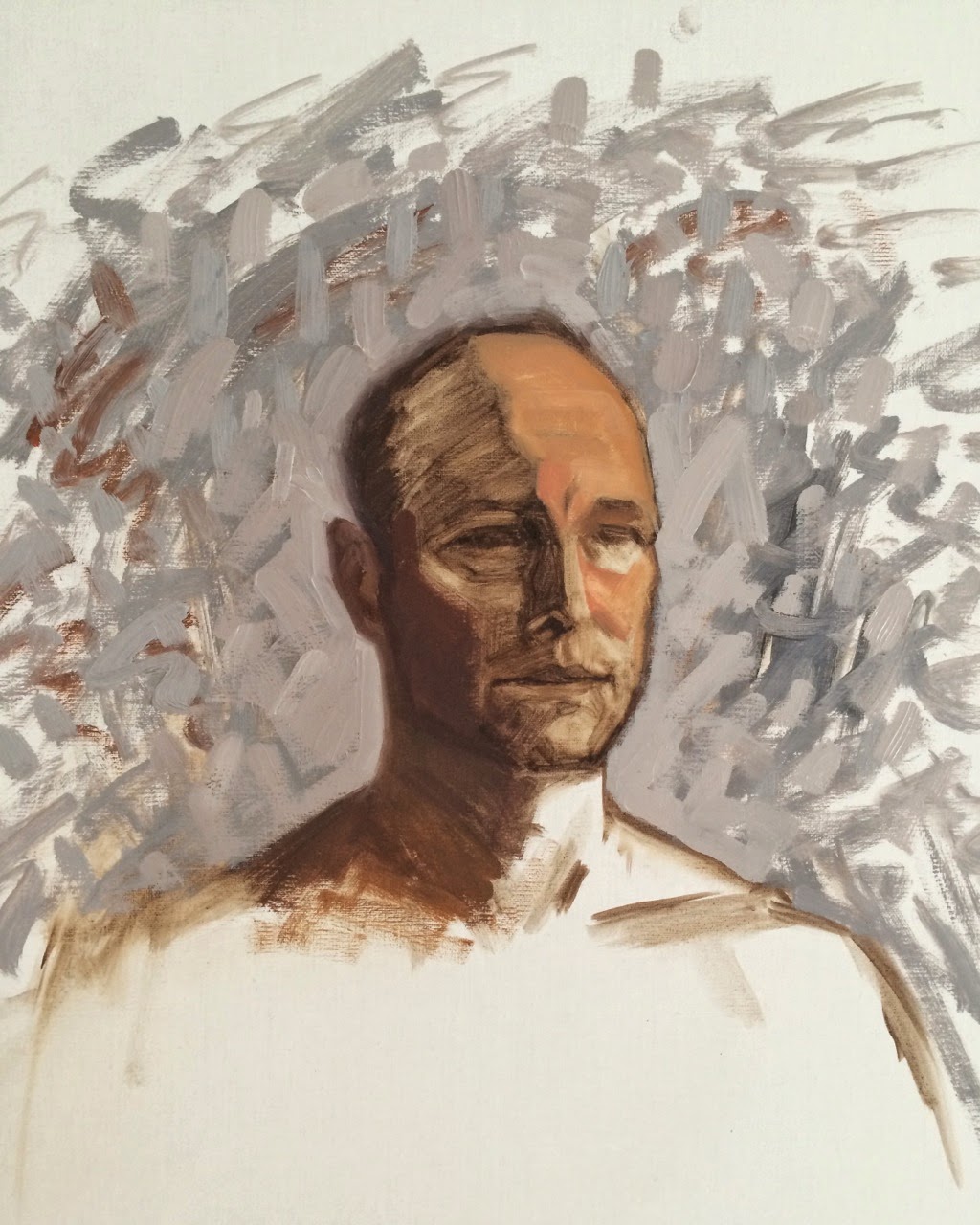 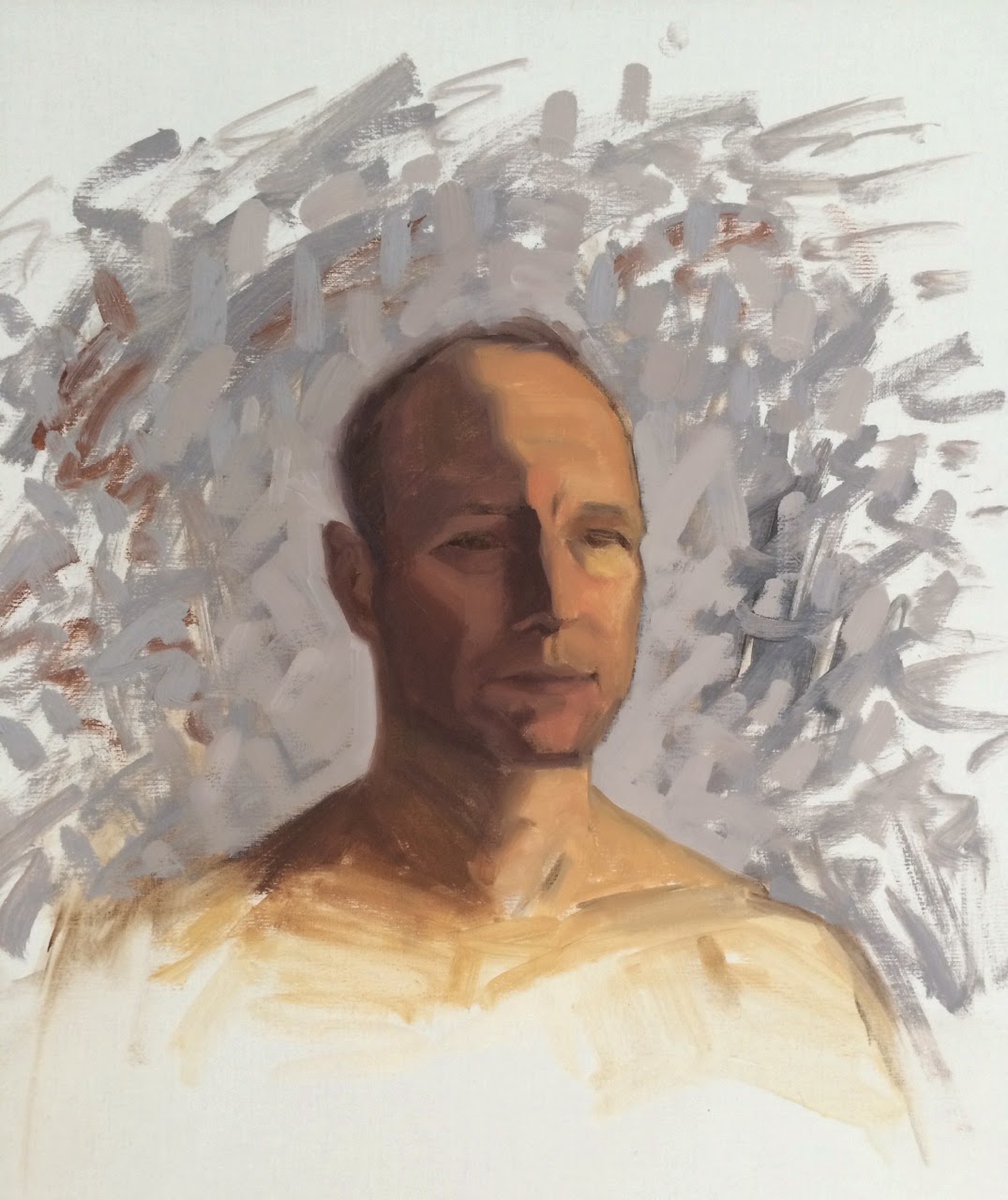 At this stage the brush is loaded with medium (50% stand oil, 50% thinner).  The major shapes are broken down to the next level and the large mid-tone colors are massed in with large brushes starting with the shadow shapes and working into the mid-tones.  The values are kept in the middle range for now. 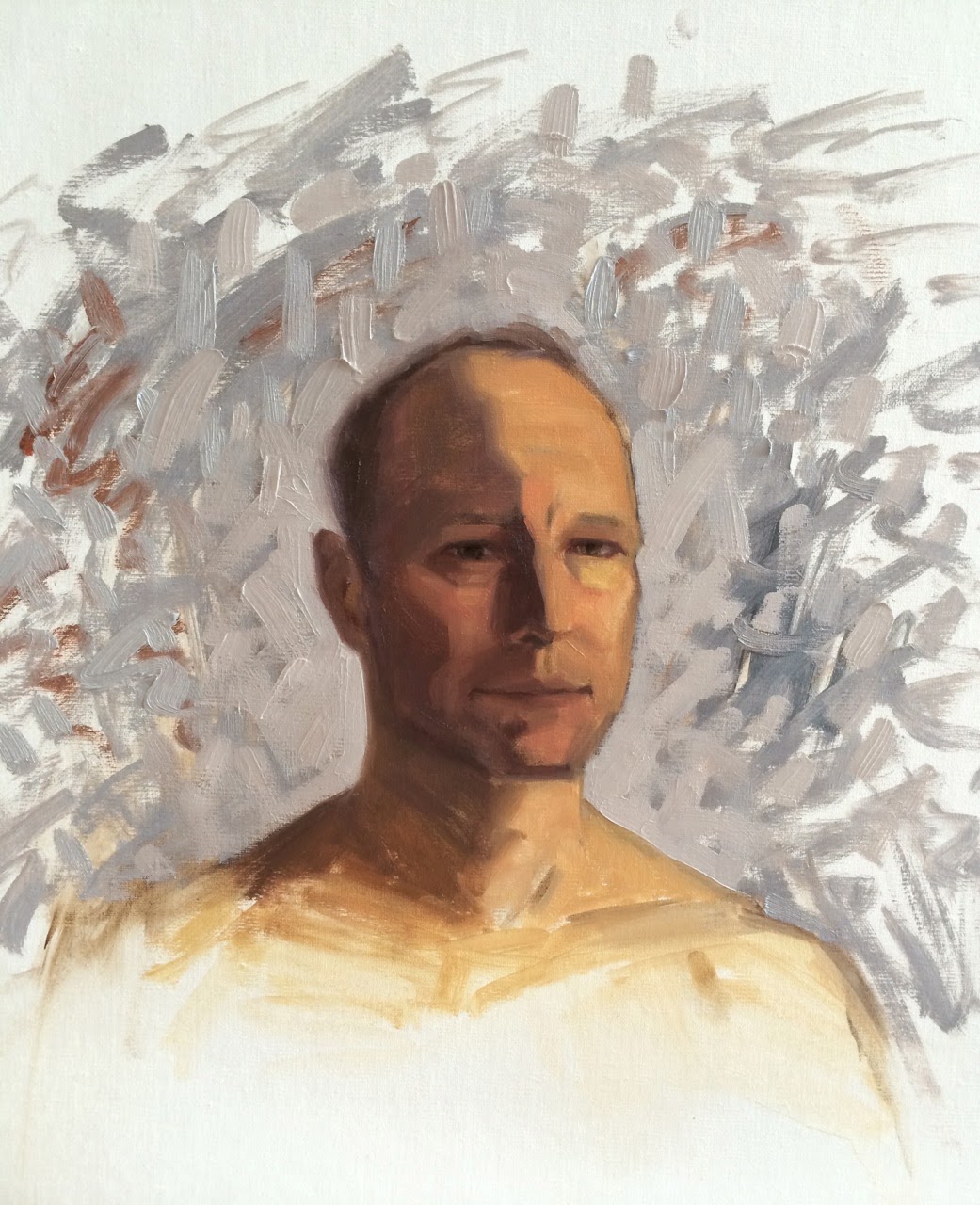 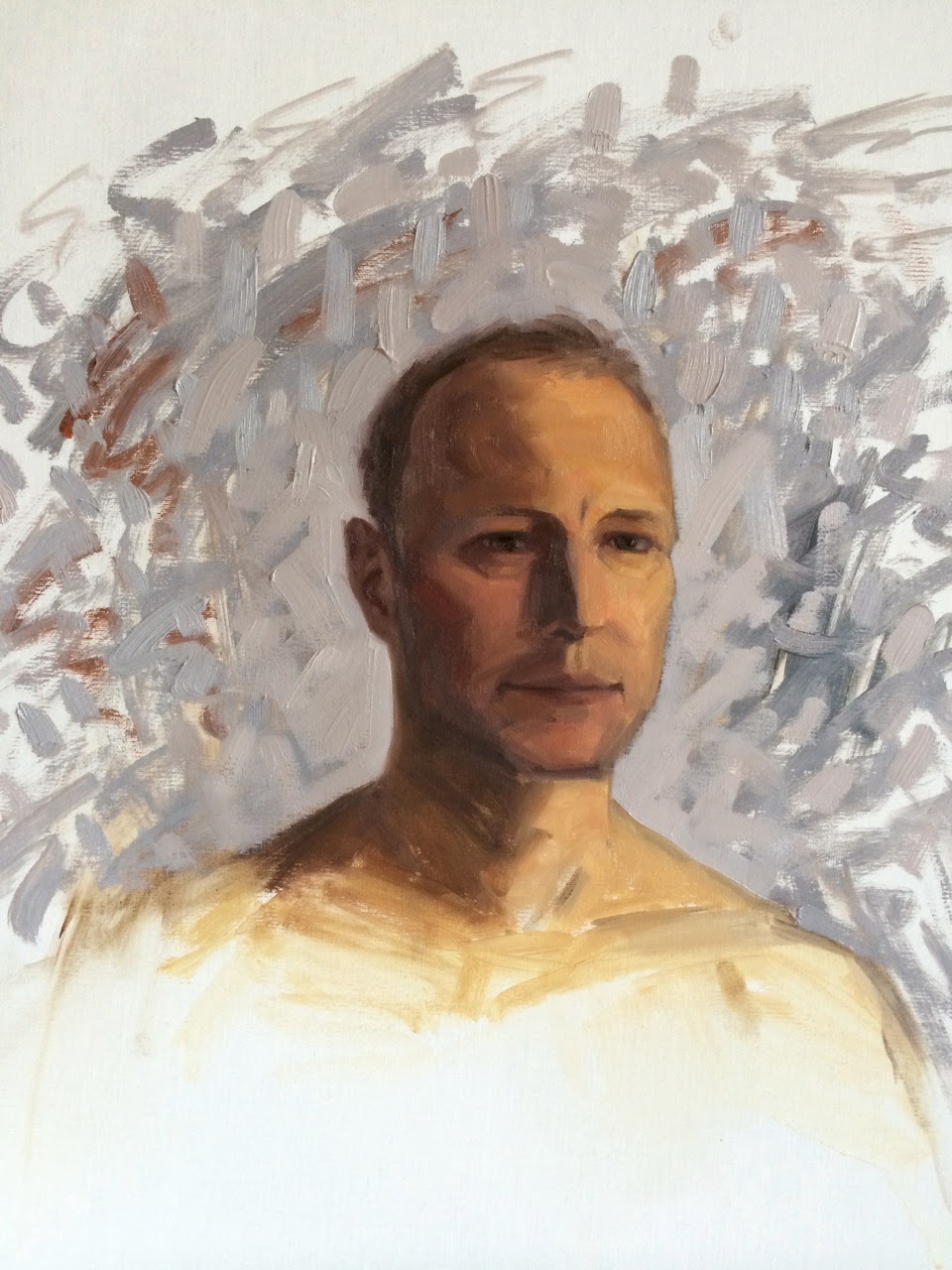 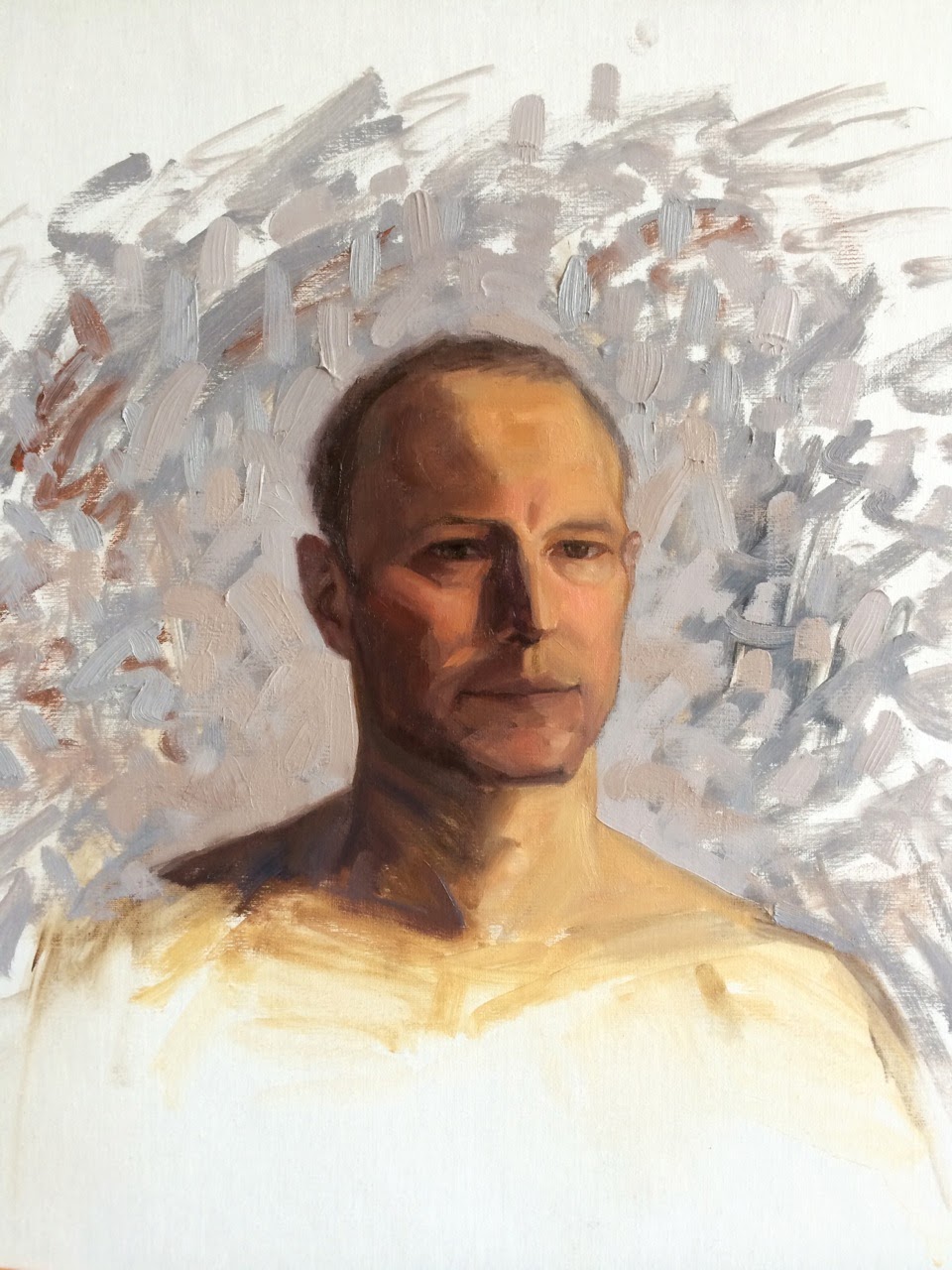 At this stage the drawing needs refinement, and a more precise exploration of the anatomical shapes.  I find it helpful to do a quick exploratory study of the major planes and shadow shapes, in keeping with the anatomical shapes identified by John Henry Vanderpoel in his classic "The Human Figure". 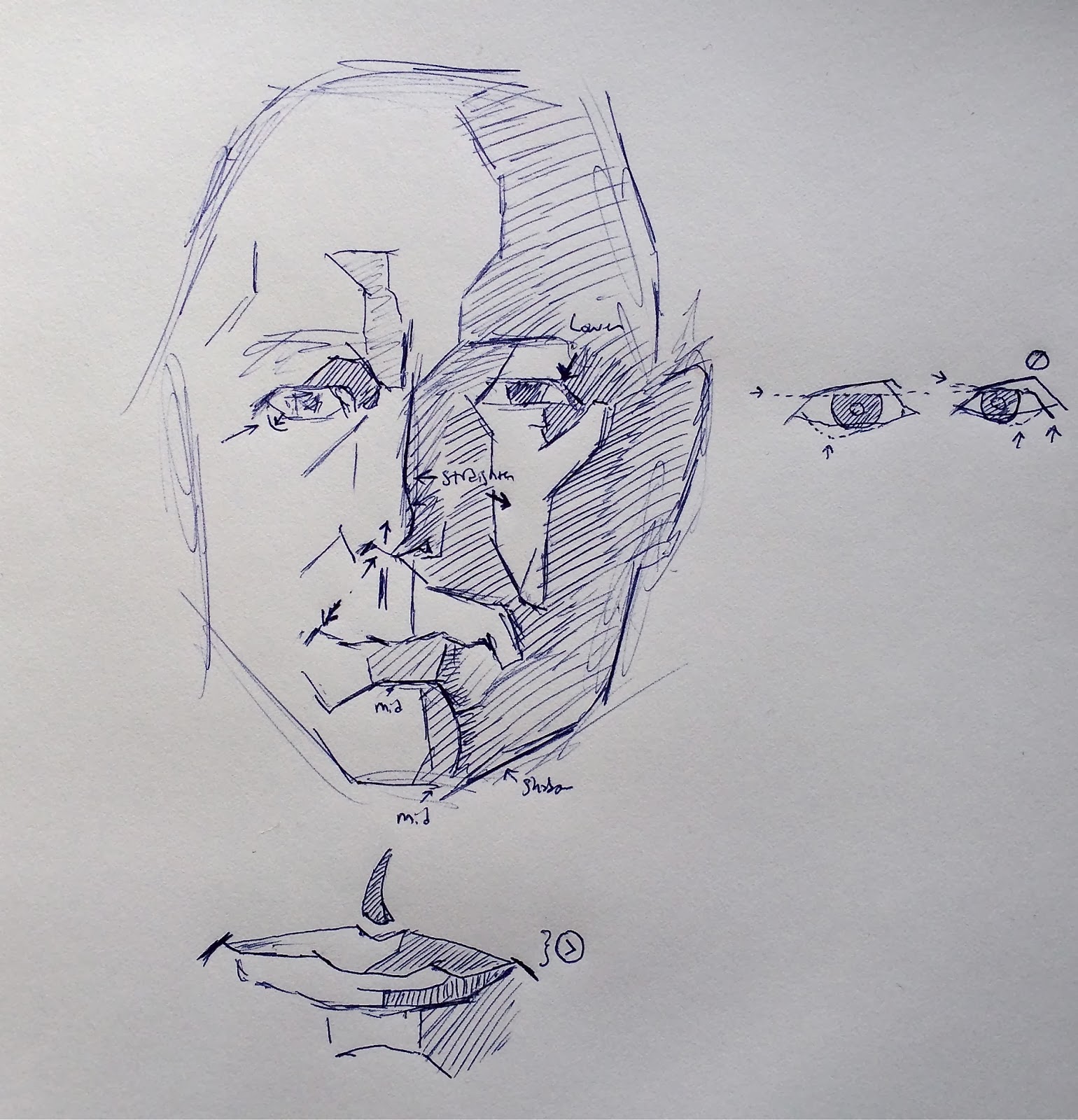 Using the drawing as a guide yields further refinement.  The "architectural integrity" of the major planes is maintained, with well-defined edges that blend into each other without losing their borders.  This way the sense of form and the structure of the head does not become "mushy" or "wobbly": 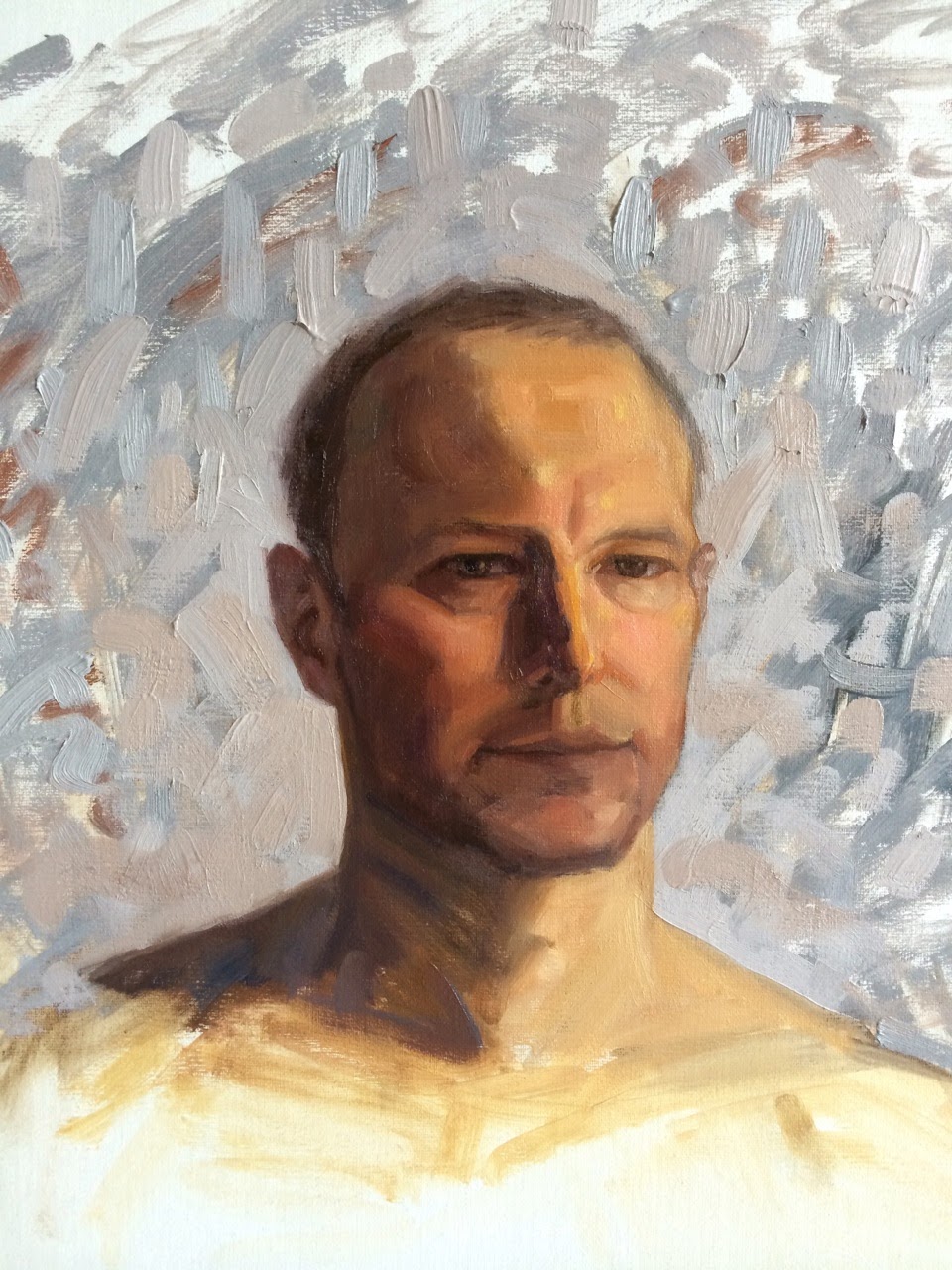 At this stage more sensitive modeling is painted using a wider value range, crawling across the form from the shadows to the lights, but using "temperature" changes rather than exaggerated value changes to articulate the turning of the form. 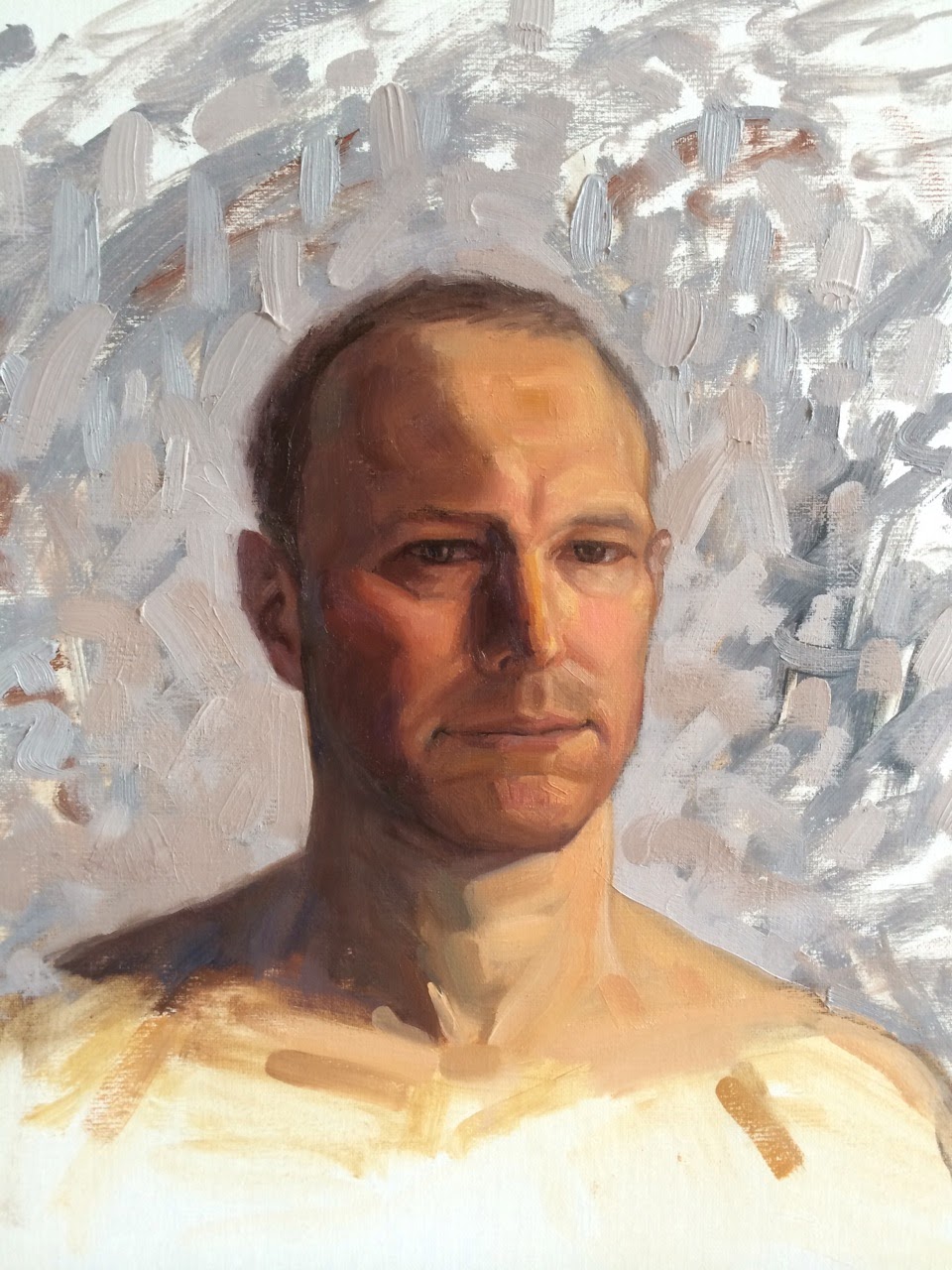 Now working all around the painting rather than "crawling" across the form, the highlights, dark accents and saturated "broken color" passages are used to make important features like the nose extend out into space and draw attention to important moments such as the red of the lips, the high points of the chin, and center of interest in the model's right eye.

Here is a detail of these finishing passages.  Note the "broken color" on the chin, and the transition from the "hot" pink of the right cheek to the "cooler" pink of the same value as the cheek turns: 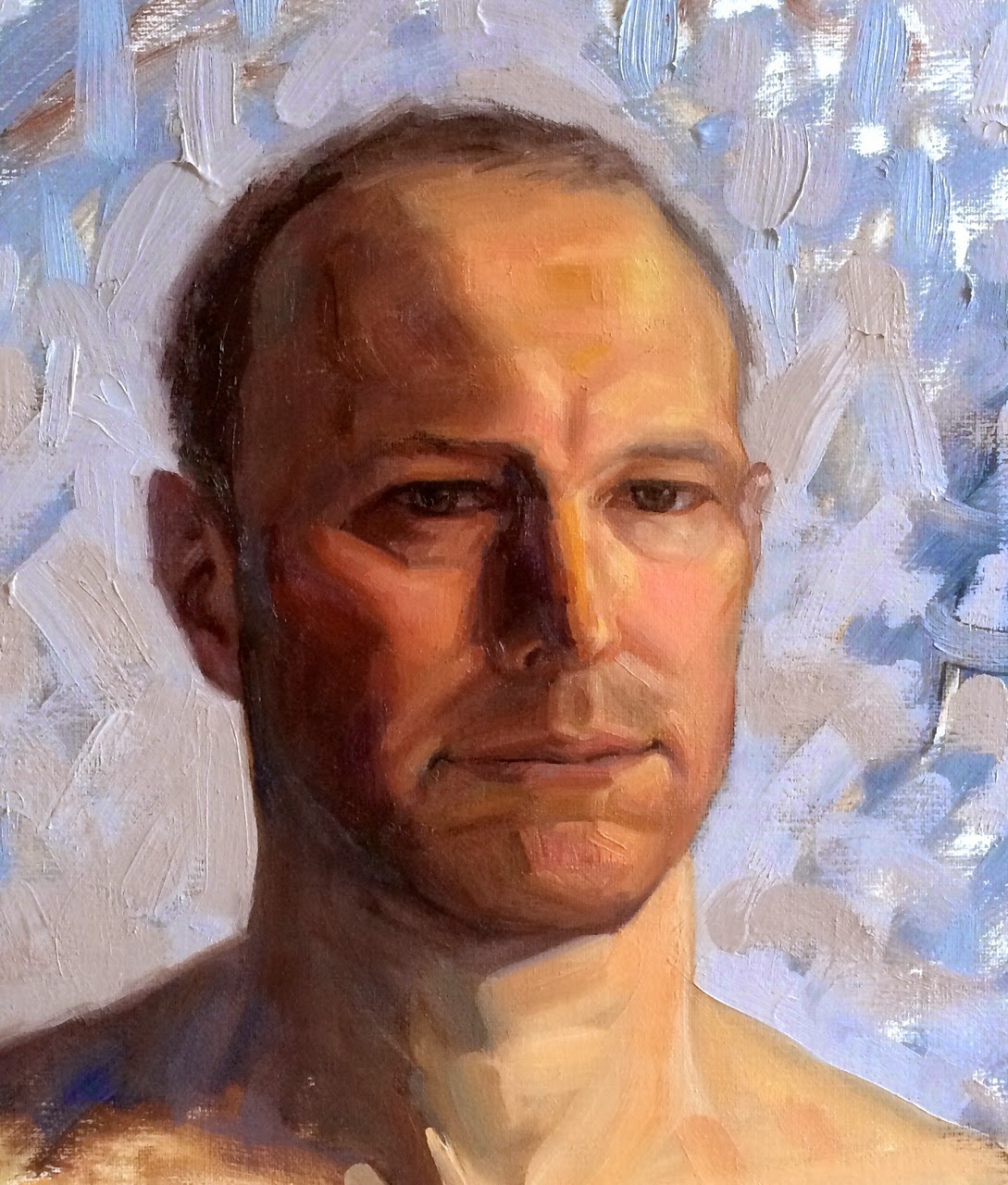 Posted by Thomas J. Shelford at 03:13 No comments:


I was introduced to the monotype printing method at the Salmagundi Club's recurring Monotype Parties which are hosted by Master Printmaker Robert Pillsbury.  The monotype (or "monoprint") technique creates a single, unique print and allows a very painterly approach to printmaking.  Ink is rolled onto a metal plate and then wiped away by using the "subtractive" method that is identical to creating an "open grisaille" or "wipeout" underpainting.  In the subtractive method, the plate (usually copper but can be plexiglass for tracing a drawing)  is covered with ink and the lights are "rubbed out" with a variety of brushes, styluses and other mark-making tools.

When the print is pulled on wet paper, the result is Tonalism at its best: smoky, atmospheric, and moody with loose, expressive edges. This style was exemplified in the 19th century by painters like Jean-Baptiste-Camille Corot, George Inness, and James Abbott McNeill Whistler.


A great place to learn and practice monotype printmaking is The Lower East Side Print Shop which offers residencies to working artists, providing 24x7 access to their facilities which include a Charles Brand press.  I recently completed a residency at LESPS and exhibited the results, a series of monotype landscapes, with Grenning Gallery in Sag Harbor.

Lastly, here is a recommended book for learning about the history of monotype printmaking:

The Painterly Print: Monotypes from the Seventeenth to the Twentieth Century, by Sue Welsh Reed.

Posted by Thomas J. Shelford at 00:00 No comments:

Thomas J. Shelford
Thomas has exhibited in the public collection of the U.S. Ambassador to the Netherlands at The Hague, the Salmagundi Club of NYC, Gilles Larrain studio and Grenning Gallery of Sag Harbor NY.