skip to main | skip to sidebar

In a departure from the previous generations' preoccupation with irony and alienation, young artists of the Facebook generation such as Elke Reva Sudin, with her "Hipsters and Hassids" series, are forging a new zeitgeist with a global outlook and a powerful sense of community that is also informed by an unabashed spirituality. Armed with graphic line quality and sensitive observation, the members of the young Brooklyn vanguard are building their art out of the intersection of the old and the new, influenced by such sources as comic book illustration and street graffiti. 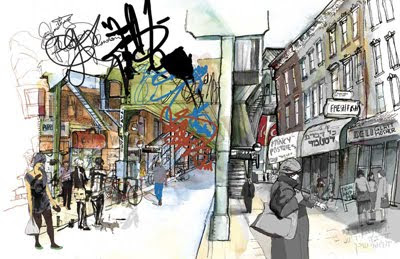 Mrs. Sudin, walking in the footsteps of her senior colleagues featured in "The Upset", seems to reject as futile the notion that the artist must re-invent the wheel using only her internal monologue as raw material. As an active member of Brooklyn's vibrant Jewish orthodox community, Sudin is outwardly focused, embracing realism as a universal vocabulary that can be used to integrate unlikely cultural forces and forge connections with the viewer without relying upon conceptual jargon or marketing schemes to make the work coherent. Her work is solidly grounded in classical illustration training, yet avoids a formulaic approach by employing an arsenal of mixed media styles and empathy for the idiosyncrasies of each lovingly observed subject.

Specifically, Sudin's work provides a visual roadmap displaying the connections between modern urban multiculturalism and the eternal human need for community and spiritual connection. Her "Hipsters and Hassids" series is relevant to broader cultural trends, while remaining specific to the beloved eccentricities of Brooklyn itself. Exhibiting a compelling sense of place, Sudin's vantage point is not that of the snarky voyeur striking an ironic pose, but rather her insights are gained from a close intimacy with, and affection for, her subject matter. This is even evident in her pen & ink architectural sketches, in which an overlooked pile of bricks oozes personality. Her work represents a visual manifestation of a phenomenon witnessed in the Brooklyn music scene with performers like Matisyahu and Eprhyme, and provides us with a compass pointing to the emerging characteristics of 21st century art.

Thomas J. Shelford
Thomas has exhibited in the public collection of the U.S. Ambassador to the Netherlands at The Hague, the Salmagundi Club of NYC, Gilles Larrain studio and Grenning Gallery of Sag Harbor NY.